The Crofton Roman Villa house was occupied from about AD 140 to 400 and was the centre of a farming estate of about 500 acres. Nearby would have been farm buildings, surrounded by fields, meadows and woods.

The house was altered several times during its 260 years of occupation and at its largest probably had at least 20 rooms. The remains of ten rooms can be seen today, now within a modern cover building. Two rooms contain the remains of their opus signinum (concrete) floors, and three have evidence of tessellated (tiled) floors. Details of the under-floor central heating (hypocaust) can be seen, which features both channelled and pillared systems.

The site was fully excavated by the Kent Archaeological Rescue Unit which also carried out the complete preservation scheme, with funding provided by Bromley Council. The Unit now manages the scheme in conjunction with the Council. 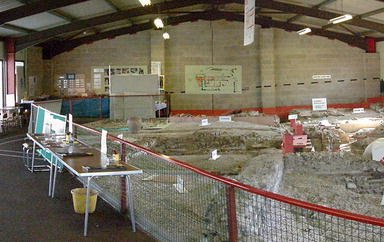 We are sorry to announce that due to the Coronavirus (COVID-19) outbreak, our August event 'Marvellous Mosaic Making' has been cancelled for the Crofton Roman Villa, Orpington. This decision was made by the organisers in order to ensure the health and safety of the public and our volunteers.

The trustees regret that the Crofton Roman Villa, Orpington will not be opening before August. Depending on the progress of the virus, we hope to open in the near future. We apologise to schools and groups who had planned to visit, but we look forward to welcoming you soon. Please keep checking our website for future updates.

For details of our school visits, please scroll down to view our Information for Teachers section.

PLEASE NOTE THAT THE VILLA WILL REMAIN CLOSED UNTIL AN OPENING DATE HAS BEEN DECIDED.

When the villa has been re-opened, the opening times will be:

Orpington railway station is adjacent to the villa

Although the Council for Kentish Archaeology (CKA) has ceased to function the Kent Unit holds most of the back numbers of the Kent Archaeological Review and these can be purchased from KARU (at £1 a copy, plus postage), presently only by post, but normally also from the Roman House at Dover.

Things to see and do at the villa

"...The only Roman Villa in Greater London open to schools..."

Ten rooms of this Roman villa-house are on view with the remains of an extensive system (under-floor central heating) in five rooms and evidence of opus signinum (concrete) and tessellated (tiled) floors. With graphic displays, models, Touch Table and activities for children.

Schools are cordially invited to visit the Crofton Roman Villa. Facilities are designed for to meet the National Curriculum and are targeted at Key Stage 2. The very popular Roman Villa Activity Workshops are available April to October.

For further information and to book a visit please contact

If your school is unable to make a class visit (or even if you do!) children and families are welcome to visit during normal opening hours (see above)

Facilities and activities are designed for children undertaking school projects.

Please do send for information leaflets for your class.

Minimum number of pupils 20 and maximum 60

Workshops consist of two talks, each followed by activities, when the children divide into smaller groups (up to 15 children)

Teachers and helpers are requested to help during the activity sessions. This is a very full 2-hour programme so late arrival may result in the activities having to be curtailed.

Introdcution to Life in Roman Britain - A special activity event

Minimum number of pupils 25 and maximum 30