The Roman Painted House, the finest Roman House on show in Britain, was discovered by Kent Archaelogical Rescue Unit. Forty years of excavation across ancient Dover by the Unit have uncovered 50 major structures. The Painted House was the best preserved and is now a major tourist attraction. Built about AD 200 it formed part of a large mansio or official hotel, for travellers crossing the Channel. It stood outside the great naval fort of the Classis Britannica, but in AD 270 it was demolished by the Roman army during the construction of a larger fort.

The long-lost Roman 'Saxon Shore' fort, predicted by Sir Mortimer Wheeler and found by the Kent Unit in 1970, lies buried under modern Dover. A large section of its west wall, together with a major bastion, survive inside the Roman House cover building. These cut through Rooms 3, 4 and 5.

After discovery in 1970 the Kent Unit promoted a major tourist-preservation scheme and the House was opened in 1977, on behalf of the Dover Roman Painted House Trust. Over 700,000 visitors have seen the Roman House which is open for 150 days each year. Admission charges and voluntary effort almost cover the running-costs. The Scheme won four national awards, including "The Best Preservation of an Archaeological Site in Britain" (Country Life Award). "Outstanding Tourist Enterprise" (B.T.A. Award) and "Museum of the Year Award". The Unit also won the famous Silver Trowel Award, presented to it by H R H Prince Charles.

The walls in four rooms survive to a height of 4-6 feet and the hard red concrete floors cover substantially complete central-heating systems. Visitors can see the large arched flues, the various heating channels and the vertical wall-flues that kept the building comfortably warm 1,800 years ago.

The burial by the Roman Army resulted in the unique survival of over 400 square feet of Painted plaster, the most extensive ever found north of the Alps. Above a lower dado, of red or green, visitors can still see an architectural scheme of many coloured panels framed by fluted columns. The columns sit on projecting bases above a stage, producing a clear 3-D effect. Parts of 28 panels survive, each with a motif relating to Bacchus, the Roman God of wine.

As with the Crofton Roman Villa in Orpington, we take bookings for school visits, which include fun activites and facinating facts about Roman life in Dover. Please see our 'Information for Teachers' section below for further information.

Please note that the Roman Painted House is now closed for the Winter season.

Re-opening times for Spring 2022 to be confirmed. 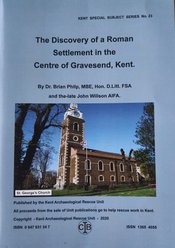 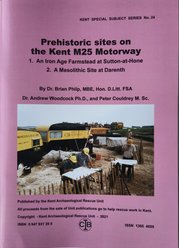 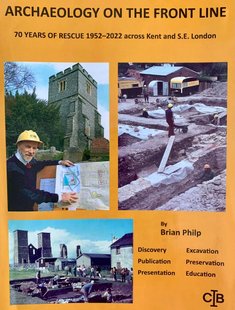 Please check back for 2022 opening times!

This major tourist attraction is managed and staffed entirely by volunteers, who have worked here for the past 39 years. There are no paid staff. Occasionally, through illness or other problems, some volunteers may not be available as planned and (rarely) days may be missed. If your visit involves a long journey, you might consider phoning the Painted House in advance to ensure that it's open when you arrive –01304 203279.

Activities at the Roman Painted House

Following the publication of the Roman shore-fort at Dover in 2012 (KARU Volume 11 of Kent Monograph Series) a special display of some of the outstanding Roman artefacts discovered during the rescue excavations are now on display.

It is well worth making a visit to the Roman Painted House at Dover just to see these and several other amazing pieces in this special display!

(You can purchase a copy of the Dover shore-fort volume by visiting our publications page).

On display we have this fine sculpted marble head of a woman. It has been suggested she could be the Empress Sabina, Consort of the Emperor Hadrian or of a woman who copied Sabina's hairstyle. It might have been set in an alcove in a wall and used as a shrine during the Classis Britannica period. 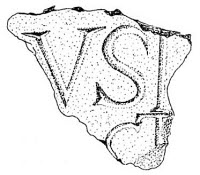 Part of a well-cut inscription is also on display. The fragment consists of just parts of two lines with faint traces of red paint in the letters. The upper three letters (VSI) is unusual and the lower sT suggests a Classis Britannica link. It is suggested this piece was part of a monumental dedication inscription. 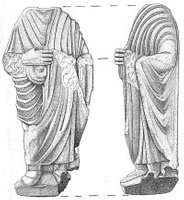 This headless sculpture ia a fine example of a statue representing a third life-size Roman wearing a full toga.

Information for Teachers: School Visits to the Roman Painted House

Your school is cordially invited to visit this major Roman site at Dover and to take part in its special Roman Life Activity Workshops.

Bookings and Other Details

An introductory talk  by an archaeologist on the exciting discovery and excavation of the Roman forts and the Roman Painted House. To illustrate one aspect of life in the Roman Dover, three children can be dressed as Romans -- as a Roman lady, a Roman senator and a Roman slave boy.

A guided talk  on the key elements of the Roman House -- its in situ wall paintings relating to the god Bacchus, its well preserved underfloor central heating system (hypocaust), its construction by the Roman navy in AD 200 and partial demolition and burial later (AD 270) by the Roman army when it built its new fort.